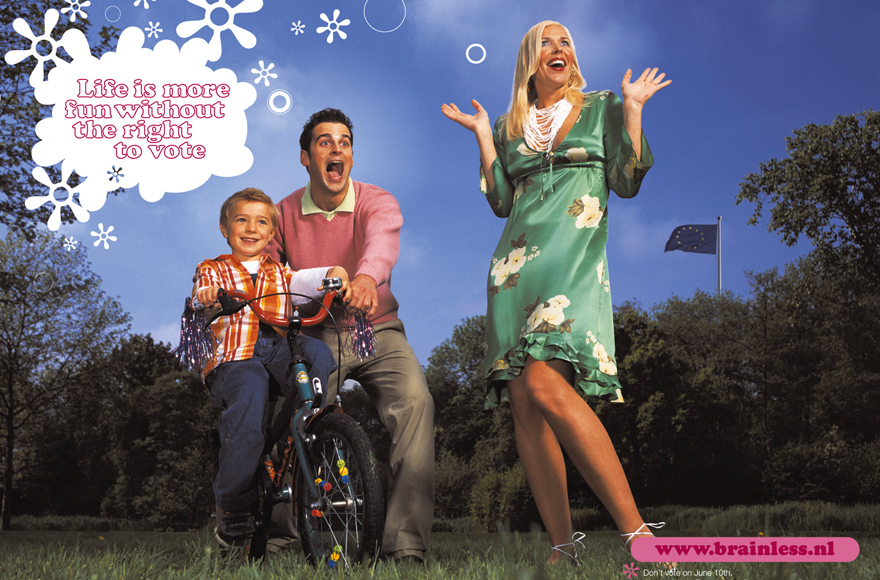 The Brainless Foundation
Life is more fun without the right to vote. The Brainless Foundation offers you the possibility to permanently renounce your voting rights. You can do this by signing the Exemption Agreement. Your life will become more care-free and you’ll have even more time to do fun stuff! Whatever you do, don’t vote on June 10th 2004, the day of the European parliamentary elections.

What does the the Brainless Foundation think of Europe?
If as many people as possible sign the Exemption Agreement, Europe will become the biggest amusement park in the world.

What does The Brainless Foundation regard as ‘fun’?
Fun is what makes life more care-free: blowing bubbles, eating crostinis, going to the beach on june 10th, sipping rosé and frolicking with pink poodles. Basically, everything except voting. Please sign the Exemption Agreement.

Results
Since the campaign kicked off on 25 May, 2004, it has received a steady flow of free publicity from television networks, radio stations, newspapers and magazines. The website is well noted, controversial, and there is no shortage of word of mouth.

The Brainless forum has become a thriving arena for fungagement and hard-talk between people from all ranges of the political spectrum, ranging from anarchists to conservatives, a place for lively discussions about the crucial democratic question: to vote or not to vote?

Young people in particular are triggered to consider what the right to vote means by the provocative stance and campy look and feel of the campaign. Because youngsters do not always understand the irony, this often leads to indignation: “I’m going to vote to get you guys out of business!!” Reverse psychology is the core principle of this campaign.